My (THE) problem with community art...and why William Burroughs EAT Superflex any day of the week!!! 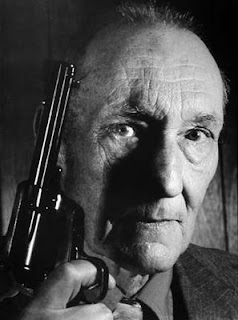 Last night our new found friends from Chicago came to visit us in our little house on Farnsworth street in Detroit.
We talked a lot about art,
and again (as it often does here in the midwest) the discussion turned to the virtues (or not) of community art and audience participation. Kevin was talking about an artist colleague of his who did a project where she would install plastic containers at the toilets of friends and collect their left overs to produce manure, which she would then later return in a cup, ready to be used in the nearest flower pot.
We talked about how LONG she would be able to sustain this practice and if that was important or not for the project.
Or if it was maybe enough that the art worked on a more metaphorical, symbolic level.
Apparently this woman was also a great communicator and had managed to get support from powerful people (Patricia Arquette) in high places (Hollywood).
Surely this could be a very useful, green and worthy art project with many possible positive benefits for mankind and the planet as a whole?
And it is usually around this point in the discussions surrounding community art that I fall asleep spiritually and mentally .
And it's not ONLY because I am a mean spirited, jaded cynic, who can't value utilitarianism.
But because it is sOoOOoOoooOOooooo different and alien from my own experience of art and culture.
If I look at my own experience of culture I think about what was important to me, what changed me as a human, and what helped me to develop.
I value and respect Greenpeace, the Red Cross (and the Crescent) or Médecins Sans Frontières
just as much as the next guy. I just don't think it's art, and I don't think that they see it as art either. It would take some truly hardcore relational aesthetics guy or girl to claim that as an art piece.
There were very few utilitarian reasons for me to listen to Sex Pistols or Throbbing Gristle,
or read books by William Burroughs, Charles Bukowski or Jack Kerouac,
or laugh myself silly reading Robert Crumb....au contraire!
There was NOTHING healthy about it.
Which of course was partly the reason why I got into it in the first place.
Does anyone SERIOUSLY believe that people listen to Death Metal or experimental Jazz for any hidden health reasons?
But it DID help me to become a more complex person, it did challenge my beliefs and it did force me to open up to new ways of looking at the world.
And it DID fuck up my mental hard disk and after that I can't process information and ideas in the same way as I did before and I think that's all you can ask of art.
Here in the midwest (as I have written about before) a lot of the little support there is for art, is tied to educational projects.
I have no problem with this, I TOO teach, but I don't call it art!
In the 60's and 70's there were huge debates in Europe and USA.
Usually from a leftist perspective.
Wasn't it time for the artists to FINALLY get off the fence and make themselves useful for the workers and join the revolution?
Every artist and writer joined either the Communist party or the RAF, except Salvador Dali who just wanted to make preeeeeecious GOooOoOOOLD!
"Make yourself useful, go into Bijlmer and help some poor Suriname kids".
Was the mantra (until very recently) from Dutch politicians who felt that maybe they could finally get some economical and social returns from the artist parasites that they had subsidized for much too long.
I am already doing this by the way, but for other more "culturally perverted" (=sound) reasons.
Now the calls come from the cultural right
(or maybe the cultural nihilists would be a more correct description).
Go and entertain Henk and Ingrid in Apeldoorn
(the Suriname kids are of course out of fashion).
I don't mind being useful or utilitarian, but I rather call that teaching, lectures or workshops
to be able to keep my art free, dirty and perverted.
And if you haven't paid attention, most poor, uneducated people ALSO prefers their culture dirty and nasty.
See Baile Funk in Brazil and Gangster Rap in the States, aso...
And they find it condescending when we honkies come up with another well meaning
Do Good-er project in the Bijlmer, Rio or Detroit.
So let's keep REAL culture SICK n NASTY and leave the Do Good-erism to Greenpeace.
And if you absolutely can't restrain yourself and just HAVE TO DO SOME GOOD...
just call it a workshop and you're off the hook....
Peace Out!!!!
Jonas Ohlsson reporting form Detroit thanks to Expodium
Clarifications for Non Dutch/European people...and idiots!
-----------------------------------------------------------
Superflex=Danish art collective who builds water wells in Arica.
William Burroughs=American, anti drug and homo writer.
RAF= Rote Armee Fraktion (German leftist terrorist group from the 70's)
Suriname= Dutch ex. slave colony country, north of Brazil, now independant and free.
Henk & Ingrid=an imaginable ideal couple of "normal Dutch people" in Holland, used by right wing manipulator Gert Wilders in his propaganda against multiculturalism.
Apeldoorn=small town in Holland, representing "white trash country" in this text...
as opposed to...
Bijlmer="The Watts" of Holland, south east suburb ( ex. ? ghetto) of Amsterdam consisting of 100 000 people, 80% black, mostly from Suriname, Aruba, Curacao, Saba (all ex. slave colonies of Holland) and Nigeria and Ghana. Plus some honkies....
Médecins Sans Frontières=Doctors Without Borders.
Who for the last three decennias have fought a global, bloody turf war against NWW=
Nurse With Wound.
Geplaatst door jonas ohlsson op 6:27 PM

Promote your Page too

Quinsy Gario, Dutch artist, is enjoying a fellowship at Wayne State university this summer. He will use this blog to report on his findings in Detroit.

Dutch artists Cecilia Rebergen & Jop Vissers Vorstenbosch embarked on a journey to Detroit and its periphery, joining the Popp's Packing Residency in Hamtramck and acquiring a van to travel in and beyond the Michigan state in 2016.

Expodium happily grants them permission to post their encounters, actions and reflections at this blog, expanding our archive to artistic endeavours beyond from the New Strategies DMC Residency.